New : A spiral of disciplined inquiry

If you are a teacher, head of department or headteacher and interested in disciplined inquiry, this post is for you.  In this post, I will examine Timperley, Kaser and Halbert's (2014) Spiral of Inquiry, and consider the implications for teachers and school research leads undertaking practitioner inquiry. Kaser and Halbert (2009, 2013)) and Timperley (2011) have previously written about 'spirals of inquiry'.  However, they argue that the 2014 version of the model is different from previous iterations

So what is a spiral of inquiry?

Timperley et al describe the spiral of inquiry process as a multi-tiered and multi-connected process, which is framed by two central questions :What’s going on for our learners?  How do we know? (p7) and is illustrated in the following figure 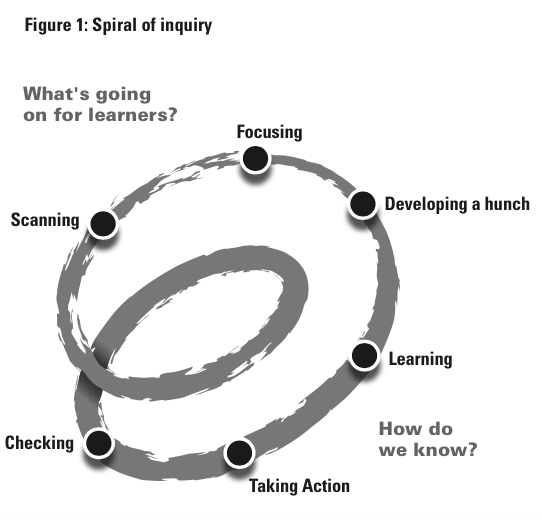 Phase 1 Scanning
During the scanning phase the focus is on what's going on for your learners.  It's about being open and seeking new sources of evidence.   When focussing on what's going on for your learners, the focus is not just on the academic outcomes of learning but includes:
Phase 2 Focussing
The phase of the spiral inquiry involves asking the question : Where are we going to concentrate our energies so that we can deliver the experience and outcomes for our learners (p10).  In doing so, this will involve:
Phase 3 Developing a hunch
In this phase the focus is on How are YOU contributing to this situation? (p13).  Hunches are often based on intuition and are not grounded in evidence.  In this phases, we must have the confidence to bring these hunches to the fore, and explore the underpinning assumptions and evidence.   However, to explore deeply held views, will require 'emotionally safe learning environments for teachers, so these hunches can be explored without fear.   As such developing hunches is concerned with with:

Phase 4 New Learning
This phases involves asking a number of inter-related questions : what do you need to learn; how do we go about learning it; and where can learn more about what to do.  This inevitably involves engaging with the latest research literature on learning and what makes a difference for our learners.  However, it is recognised, that works somewhere else may need to be adapted if not transformed, if it is to work in a different setting.  For this part of the spiral to work it requires;
learning to be connected to the needs of our learners;
Phase 5 Taking action
This phase consists of taking informed action which will make enough of a difference.  However, this action involved learning in depth about new and innovative ways of doing things and which is informed by a profound awareness of why these new practice are more worthwhile than previous actions.  It is also about evaluating the impact of the new practices on learners, whilst at the same time creating conditions of openness and trust amongst teachers.

Some initial observations
The spiral of inquiry is an incredibly useful model to help school research leads support colleagues engage in teacher inquiry.  It provides a well-structured and thoughtful process, which captures some of the messiness of the inquiry process.  The model also provides a way of thinking collaborative activity with colleagues both within and between schools. Nevertheless, as with all such models, there are always matters for further consideration, which may have been omitted or require further discussion.    As such, three issues require further consideration: the expertise and skill levels of the teacher participants; connections with evidence-based medicine; and, the evaluation and checking of impact

Expertise and skill levels of the teacher participants
Timperley et al state that : The spiral of inquiry provides a mental model this is systemic but not simplistic (p23), and I would agree.  However, the various phases of the spiral will require the development of sophisticated skills of inquiry, and which would be incorrect to assume that many, if not all, teachers have the appropriate skill level and expertise.  Skills required include: the ability to understand the various mental models being used to generate the assumption which underpin the development of well-formed hunches; the ability to interrogate the 'academic literature' for ideas, processes and interventions which may be usefully deployed to meet the challenge at hand; or finally, the skills necessary to gain genuine insight of the concern of learners, parents and the

Connections with evidence-based medicine
For me, a core weakness of much of what is written about evidence-informed teacher inquiry derives from a lack of awareness of some of the processes associated with evidence-based practice, and it could be said, that education already has plenty of spirals, but often this represents an unnecessary re-invention of the wheel.   An example of this is Timperley et al's claim that placing learners, and other stakeholder such as parents, at the centre of inquiry is an inherently novel feature of the spiral of inquiry. Unfortunately, evidence-based medicine has since its very inception placed significant emphasis on the needs, values and concerns of patients. For example, Straus et al al (2011) describe evidence-based medicine as requiring ... the integration of the best research evidence with our clinical expertise and our patient's unique values and circumstances.

Checking and have we made enough of a difference
The questions which underpins the checking phase of the spiral, is whether we have 'made enough of a difference?  In particular, Timperley et al argue that only through careful checking can we decide whether we have made enough of a difference.  Checking whether you have made a difference may seem a relatively straightforward task, however,  it is not without its challenges and complexities.  A useful place to start is with Stufflebeam and Coryn's (2014) definition of evaluation, which is as follows: evaluation is the systematic assessment of an object's merit. worth, probity, feasibility, safety, significance, and or/equity. (p12) If we take merit and worth as a starting point, merit being th the intrinsic quality or excellence without reference to costs  and worth-  the quality of the item, taking into account both context and costs.  So the question becomes, not are we making enough of a difference, but rather are we making enough of a difference given both the context and costs.  And, this development of the notion of 'difference' can be continued with each of the criteria - such as significance and feasibility.

To conclude:
The spiral of inquiry is an important contribution to the developing discipline of evidence-based teacher inquiry.  It is an approach which has much potential, particularly given the focus on what is going on for learners.  However, for the potential of the model to be realised,  it needs to be implemented  by practitioners with the necessary skills, knowledge and expertise to make the most of the sophistication of the approach.

Timperley, H, Halbert, J and Kaser, J. (2014) A framework for transforming learning in schools: Innovation and the spiral of inquiry, Centre for Strategic Education, Victoria