As the start of term approaches, school leaders will be preparing a range of INSET and CPD activities designed to support the latest initiatives.  Unfortunately, many of these initiatives – be they about about teaching and learning or school leadership or management -  will be the product of the latest or management or education fad.  However, it's not just management fads that we have to look out for, we also need to aware of zombie ideas - ideas which are still being used despite being disproved by the evidence.  So the rest of this post will explore first,  the nature of zombie ideas; second, provide some examples of zombie ideas which are still in circulation; third, suggest how to protect you and your school from being 'infected' by zombie ideas.


What are zombie ideas? 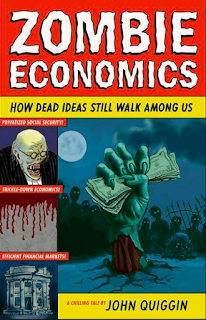 Writing after the 2008 financial crisis, Australian economist John Quiggin published Zombie Economics describing how and why economic ideas, which have been disproved by the evidence still seem to hold sway.  (Quiggin, 2012) states:

Ideas are long lived, often outliving their originators and taking new and different forms. Some ideas live on because they are useful. Others die and are forgotten. But even when they have proved themselves wrong and dangerous, ideas are very hard to kill. Even after the evidence seems to have killed them, they keep on coming back. These ideas are neither alive nor dead; rather, as Paul Krugman has said, they are undead, or zombie, ideas. (p1)

So what are some of the zombie ideas which are currently in circulation within education and management.   Probably the most helpful place to start is (De Bruyckere et al., 2015) who identifies 35 urban myths about learning and education, for example; the effectiveness of learning can be shown in a pyramid; you learn better is you discover things for yourself rather than having them explained to you by others;  we use only 10 per cent of our brains; we are good multitaskers; today’s digital natives are a new generation who want a different style of education;  class size does not matter. That said, there would appear to be a number of ideas specifically related to the leadership and management of schools, which despite the evidence still appear to be used in schools, for example: graded lesson observation; the 0.4 effect size represents a year's progress for all students; school leaders can accurately rate an individual teacher's overall performance.  However these ideas do not stand-up to critical scutiny, as such:
So how do we protect ourselves from zombie ideas and urban myths.

Willingham (2012) suggests a simple four-step heuristic, short-cut or work around to be used by non-experts when faced with subjecting an idea to critical scrutiny


However, as Daniel Willingham himself argues - the 4 steps outlined - will not turn you into an instant expert in any particular area.  However, just because gaining expertise is a difficult and time consuming process, does not mean that you cannot be critically informed about either current practices or proposed changes and interventions.  In doing so, you may save yourself from living and experiencing zombie ideas in practice.

WILLINGHAM, D. T. 2012. When can you trust the experts: How to tell good science from bad in education, John Wiley & Sons
Posted by Gary at 16:23 2 comments: