As we approach the end of the calendar year it seems only sensible to have an end of year list.   So in the spirit of 'bah humbug' I thought I'd provide a checklist of those actions where you may have tried to sabotage yourself as school research lead or where others may have tried to undermine you.  This checklist is based on Simple Sabotage by Galford, Frisch and Greene - which in turn is based on guide to sabotage produced by the US Office of Strategic Services in 1944 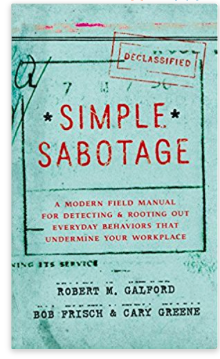 A checklist of acts of sabotage

So what are you to do if there are ticks in either column.  Well if it's you sabotaging yourself, the answer is simple STOP doing it - and do something else instead which increases your chance of success, for example, have working groups of four or less.  If it is others trying to sabotage  - call the behaviour out - if a decision has been made and subsequently someone tries to re-open the discussion - just say - 'Thank you for your comments, a decision has already been made and we are moving on' - and then move on

The School Research Lead : How to stop doing what doesn't work

#DebatED  discussed 'whether an interest in education research is more about identifying what doesn't work as suggesting what will'.  This was then following up on Thursday with a #UKEdResChat focussing on 'how do we define 'what works' in educational research? Should we also be focussing on what doesn't work?"
So with that in mind it seems sensible to examine a process for disengaging from strategies and interventions which appear not to be working.   (McGrath, 2011) has identified a disciplined process for getting out of projects and which includes these steps

Last week Schools Week published a piece by Lee Miller – Deputy Chief Executive of the Thinking Schools Academy Trust (TSAT) titled Performance related pay will solve teacher retention crisis which describes a new teacher pay structure for the TSAT – which includes
Having read the article – my first response was to ask: What research evidence is there to support the pay structure which has been put forward?

Pietro Marenco (@PMarencoHR and scienceatwork.com) very kindly tweeted an extract from (Weibel et al., 2009) who undertook an meta-analysis of the effect of pay for performance on performance and who state:

Hidden costs arise even if the price effect is stronger than the crowding-effect. The loss of intrinsically motivated behavior has always to be compensated by external rewards.  P18

Which tends to suggest that in the context of teaching – a complex task if ever there was one (Shulman, 2004) - performance related may have a negative effect on performance and may ‘crowd-out’ intrinsic motivation (and associated discretionary effort.

If we turn now to research evidence which relates specifically to the education sector, we can look at the (EEF, 2017) summary on performance pay which states:

The results of rigorous evaluations, such as those with experimental trials or with well-controlled groups, suggest that the average impact of performance pay schemes has been just above zero. Some approaches appear to show more promise, such as bonuses or enhanced pay to attract teachers to challenging schools, or loss aversion, where the award has to be paid back if student results fall below a certain level.

And which goes onto to state:

The evidence is not conclusive. Although there has been extensive research into performance pay, much of this is either from correlational studies linking national pay levels with general national attainment or from naturally occurring experiments. More recent randomized trials have had mixed results. Overall, it is hard to make causal claims about the efficacy of performance pay on the basis of the existing evidence

In addition, a systematic review by (Bajorek and Bevan, 2015)  of performance-related-pay in the UK public sector who found.

…. some evidence that PRP schemes can be effective across the three domains of the public sector for which there was evidence available (health, education and the civil service), but findings within and between the sectors are mixed, with scheme effectiveness often dependent on scheme design and organisational context

(Leigh, 2012)) and (Jones, 2013) report evidence to indicate that male teachers respond more positively to and support PRP schemes than their female counterparts, and Jones (2013) also highlighted that women are more likely to reduce their hours under PRP than men. Evidence also suggests that teachers with more experience display negative reactions to PRP in comparison to early career teachers (Jones, 2013; Leigh, 2013), although it is  PRP in the UK public sector  unclear whether this results from hostility to changes in the system, or previous negative experiences to PRP.(p91)

Finally, we could examine the work of (Lynch et al., 2016) on teacher retention who found

Factors that are significantly associated with intent to stay in the profession could be labelled as ‘protective factors’, worthy of attention among school leaders and policymakers.
Unsurprisingly, we found that by far the strongest predictor is ‘job satisfaction’. Among the other factors, the strongest predictors are:
• being proud to work at the school
• having adequate resources
• being well supported and valued by school management
• having an effective governing body
• appropriate pay for level of responsibility. P17

On the one hand, it would appear that the research suggests that:
On the other hand
So where does this leave us?

Evidence-based practice involves the conscientious, explicit and judicious use of the best available evidence – research, organisational data, practitioner expertise and stakeholder  in order to make decisions which will hopefully lead to a favourable outcome.

Given the nature of the evidence – the decision as to whether to proceed with PRP within a MAT is a judgment call.  That said, in making that judgement one hopes that the decision-makers have undertaken an appropriate process of due diligence and have asked the following questions.
And finally