The school research lead and '57' definitions of research

If you work in a school and have anything to do with research, evidence-informed teaching or practitioner inquiry, this post is for you.  In particular, this post is aimed at anyone who finds the current use of these and other similar terms - evidence-based practice, action research, enquiry-based learning -  confusing and a barrier to both your own professional development and the bringing about of improved pupil outcomes within your school.

So what do we mean by the terms : research, evidence-informed teaching, evidence-based practice, action research, teacher/practitioner inquiry?

Accepting that a range of definitions which could be used for each term, I propose the following as a starting point for subsequent discussion.

Research* is systematic and focused equiry seeking truths that are transferable beyond the setting in which they are generated (Greenhalgh, p191)

Evidence-informed teaching involves the 'conscientious, explicit and judicious use of best evidence in making decisions about teaching and learning' (adapted from Sackett, 1995)

Evidence-based practice as 'best-practice' is considered as any practice that has been established as effective through scientific research and according to a set of explicit criteria (Mullen, 2002)

Action research is the systematic collection of information that is designed to bring about social change (Bogdan and Bilken, 1992 p223)

Teacher/practitoner inquiry is defined as systematic, intentional study of one’s own professional practice.

Dana and Yendol-Hoppey (2009) quite rightly point out that the terminology used around teacher inquiry all carry a degree of baggage.  For example,  research is associated the notion of impersonal objectivity and creation of generalisable knowledge.  Action research is associated with critical practice designed to bring about social justice. Evidence-informed practice is associated with evidence-based medicine and the use of RCTs.  Evidence-based practice is associated with bureaucratic rules which remove the discretion and autonomy of the teacher.   So where do we go from here?  Wiliam (2014) argues that education can never be a research-based profession and states: 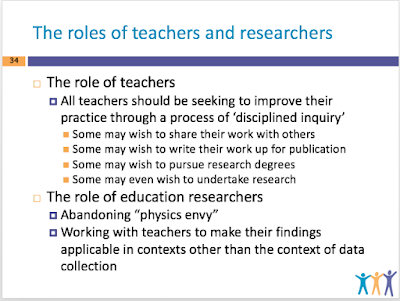 Unfortunately, Wiliam does not describe 'disciplined inquiry' so we need to look elsewhere for guidance.

So what is disciplined inquiry?

Disciplined inquiry has a quality that distinguishes it from other sources of opinion and belief. The disciplined inquiry is conducted and reported in such a way that the argument can be painstakingly examined. The report does not depend for its appeal on the eloquence of the writer or on any surface plausibility, (p. 15).

Hood (2003) usefully identifies a number of the characteristics of disciplined inquiry, which include:
So what are the implications for colleagues interested in school based inquiry?
And finally

To become a virtuoso inquirer or supporter of inquiry,  will take time and will involve a process of going from novice to higher levels of expertise.  This in turn will require going through many cycles of inquiry.  With this in mind  maybe the best we can hope for is to become competent and proficient as school-based inquirers rather than expert.

I have deliberately chosen not to use the BERA/RSA definition of research as
.. any deliberate investigation that is carried out with a view to learning more about a particular educational issue. This might take a variety of forms and be concerned with a range of issues, for example: the secondary analysis of published data on school exclusions, interviewing a range of colleagues about examination performance in the English Department, taking part in a national Randomized Control Trial concerned with the teaching of Mathematics, responding to a survey about teachers’ use of the internet to inform curriculum planning, working with a university department of education on a study into teachers’ use of new technology. (BERA/RSA 2014 p40)

As you can see this definition describes types of research activity rather than a provide any guidance as to what generic processes are associated with inquiry.  Indeed, in my view the the definition is particularly unhelpful as it lacks precision, and may lead to teachers believing that it is easy to become a researcher.

BERA/RSA (2014) RESEARCH AND THE TEACHING PROFESSION : Building the capacity for a self-improving education system : Final report of the BERA-RSA Inquiry into the role of research in teacher education

Mullen, E (2002) Evidence-Based Knowledge : Designs for Enhancing Practitioner Use of Research Findings - Presentation at the 4th International Conference on Evaluation for Practice, University of Tampere