On Saturday I was fortunate to attend researchED Scandinavia and had the huge privilege of meeting a range of educators from across Europe - plus one or two from Canada.  As always with researchED events, one got the opportunity to listen to a number of fantastic speakers and on this occasion they included:

Each session was invariably stimulating and thought provoking, with a European sensibility, and made anyone with a background in English education system think about how things could be different, which was particularly relevant given the publication on Thursday of the Education White Paper.

As for me - the day got off to an interesting start, as one of the morning's speakers was unable to attend - and @kevbartle and myself were drafted in with about 60  minutes notice and to lead a session.  Quite by chance, we had recently worked together on a blog post entitled - The Biology of School Survival - and through the combined magic of wifi, PowerPoint and USB sticks - were able to put together a presentation on 'schools as complex adaptive systems and actions school leaders can take to increase the organisation resiliency of the school'.

Later in the day - and in far less pressurised circumstances - @ChrisBrown1475 and myself - delivered our session on 'Evidence-Based School Leadership and Management' : A concept whose time has come? and which is summarised in the following two slides:- 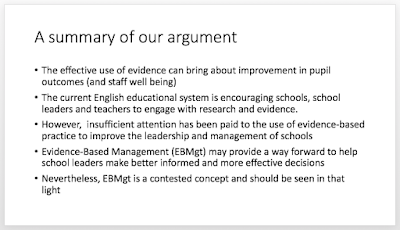 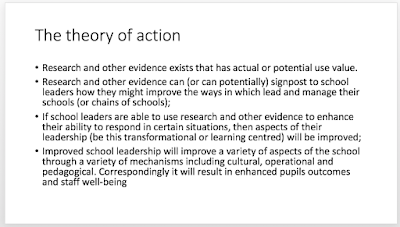 However, as with all researchED events, it is the delegates who are as interesting as the speakers and on Saturday I met with amongst others, @SchildkampKim, @Teachingpundit and @miss_mcinerney

It's important to acknowledge the contribution of @sara_hjelm to researchED Scandinavia.  Without her drive, passion and dare I say it grit and resilience, researchED Scandi would never have happened.  All of us who attended, will be forever in her professional debt for the contribution she made to our collective professional development.
Posted by Gary at 16:09 3 comments:

A few weeks ago Alex Quigley wrote an excellent blogpost entitled Five great reads for evidence-informed teachers.  Now I have to say,  I took Alex to task as I felt his selection would have been better called Five great reads for research-informed teachers, as his reading list focused exclusively on research evidence and unwittingly re-inforced the notion that evidence-based practice is the same as research-based practice.  So having gently drawn this to Alex's attention, it seems sensible to identify a number of books which can shed light on the process of being an evidence-based practitioner.*

So if you are already looking to purchase your Easter Break reading, I'd like to recommend that you have a look at one of the following.

John Dewey : How we think for a fascinating opening chapter on what is thought and the nature of reflective thinking, which I believe makes a compelling case for real evidence-based practice.

Daniel Willingham : When can you trust the experts : How to tell good science from bad in education for a really useful four-step work-around to help teachers make sense of educational research

Chris Argyris and Donald A Schon : Theory in practice and their attempt to answer the following questions : What is professional competence? How  is competence learned? How can professional education be redesigned to develop competent practice?

John Bransford et al (eds) The the role of research in educational improvement and in particular Andy Hargreaves and Corrie Stone-Johnson's chapter Evidence-informed change and the practice of teaching.


* Note - I am now of the view that there is no difference between evidence-based practice and evidence-informed practice.  The latter is a product of evidence-based practice being misrepresented as being based entirely on research evidence and removing the role of practitioner expertise.  I have explored this further in both this BERA blog post  and my recently published handbook : Evidence-Based Practice : A handbook for teachers and school leaders.
Posted by Gary at 10:40 6 comments:

An agenda for REAL Evidence-Based Education

Are you a school leader or evidence-based practitioner and interested in bringing about real improvements for your pupils (and colleagues), then this post is for you.  In this post, drawing upon the work of Greenhalgh, Howick and Maskrey (2014 ) I will outline an agenda for real evidence-based education.  Second, I will describe some of the actions necessary to deliver real evidence-based education.  Third, I will outline some of the challenges in delivering this agenda within the current English school system. Finally, I will consider the implications for leadership and management of schools.

An agenda for real evidence-based education?

Inevitably, there will be some challenges in delivering this agenda, many of which cannot be addressed by schools and individual teachers. Nevertheless, there are things that are within the domain of both schools and teachers, and I offer the following for consideration

First, one of the challenges in implementing real evidence-based education within schools is how schools are organised in comparison to health services.  Real evidence-based medicine has as its focus the needs and ethical care of the individual patient.  However, schools tend not to be organised in such a way to provide individual care to pupils, rather they are organised around year  and teaching groups.  As such, the focus is on the needs of the group and the school rather than the individual.  So the question becomes, how would a school be organised if it was designed to meet the specific  needs of individual pupils?

Second, a major difficulty in developing real evidence based education based on a medical model involves the nature of the teacher-pupil relationship.  To what extent is it possible to have meaningful conversations with individual students about different evidence-based approaches to teaching and learning, and which results in genuine shared decision-making about which approach to adopt.   How do teachers go about getting direct feedback from pupils about the relevance and effectiveness of different teaching approaches? How do teachers teachers incorporate the values and preferences of pupils in the teaching and learning process?

Third, in trying to develop real evidence-based education the accountability and performativity environment in which our schools operate within presents a major constraint.  Is it possible to say with real conviction that in all of our schools have the ethical care of individual pupils as the top priority.  Does the 'gaming' of the system lead to unethical decisions which are not in the best interest of the individual students but are taken in the interest of the school. If we were to put the ethical care of individual students at the heart of school accountability processes, what would the system look-like and how would it be different?

And some final words : Given some of the issues identified above vis a vis the organisation of teaching and learning with school and the challenges of having evidence-based conversations with individual pupils, the entry point for real-evidence education in school may not be through evidence about teaching and learning but rather evidence about the leadership and management of the adult members of the school community. In other words, in working in individual staff members it should be possible to have the ethical care of that member of staff as a priority; it should be possible to share decisions with colleagues through meaningful conversations; it should be possible to build strong 'leader-teacher' relationships which are 'humane' and caring; it should be possible to make leadership and management decisions on the basis of evidence-based practice. And if we do all of that, it may give use a chance of creating a culture within out schools where our pupils also experience real evidence-based education.