If you are interested in teaching and learning, teacher professional development or school improvement, this post is for you.  Unfortunately, education is a 'fashion-led' profession and we are seeing  'fashion' now raise its head in the form of the widespread adoption of lesson study.  Lesson study is now being widely used as a mechanism to support the development teachers as inquirers.  Yet, the EEF's current view is There is some evidence that Lesson Study could have a positive impact in English schools, but not yet enough to justify scaling it up.  With this view position being  supported by Dylan Wiliam at the 2015 Sunday Times Festival of Education.

So what are we to do?   Given this lack of evidence, it would be sensible to look at alternative ways of supporting teachers develop their practice.  One approach is School Based Instructional Rounds (SBIR), which I will now examine in more detail. 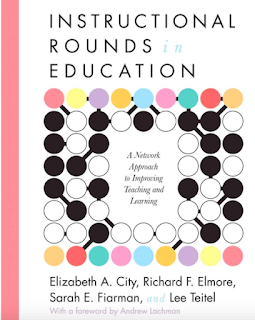 Initially designed and developed by the Harvard Graduate School of Educations to be used within a network of schools, Instructional Rounds (IR) was inspired by the approach adopted by the medical rounds that doctors use as part of their training.   Although there are several versions of medical rounds, the essential elements involve doctors - be it trainees, interns, house officers, residents or consultants - observing and discussing the elements of a patient's diagnosis after a thorough review of the evidence and consideration of the various forms of intervention/treatment.    As Elmore et al (2009) state : The rounds model embodies a specific set of  ideas about how practitioners work together to solve common problems and to improve their practice.  In the education context, we call this practice instructional rounds, or rounds for short

School Based Instructional Rounds : How does it work?

Although initially designed to work across a network of schools, the IR model has subsequently been developed to work at the level of individual schools.  So how does it work? 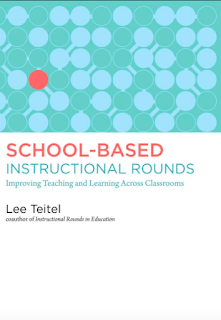 1. The school identifies a 'problem of practice' on which observers will focus during the classroom observation.
2. After a brief orientation, observers divide into groups to observer in three or four classrooms, spending about 20 minutes in each.
3. During the observations, observers write down specific non judgemental and non evaluative notes about what teachers and pupils are saying and doing in relation to the problem of practice.
4.  Following the observations, observers and participant teachers then analyse the data looking for patterns, and suggestions for improvements in practice or school systems (Adapted from Teitel, 2014)


What are the advantages of School Based Instructional Rounds?

SBIR have a number of potential advantages over network based IR, which Teitel identifies as follows:

Teitel goes onto identify two possile pitfalls of SBIR, and these include: one, teachers who know each other well staying in the 'land of nice;' two, teachers may not be able to notice what's happening as certain things are taken for granted.

Teitel identifies 5 key design questions which schools may want to consider, if they are going to incorporate SBIR into their school improvement work.

Next week, I will be looking at another alternative to lesson study - Strategic Inquiry.