The start of this  week will have seen most schools have at least one-day of INSET/CPD – call it what you will – to start off the new academic year.  No doubt many colleagues will have played ‘bullsh.t bingo’ – ticking off the number of times terms such as -  research, evidence, evidence-informed practice, best-practice, the evidence says – are used by members of the senior leadership team.  On the other hand, a full understanding of these terms can be really useful in helping you not on only spot the ‘bullsh.t, ’ but also get past the ‘bullsh.t’ and, in doing so make things better for your pupils and school.  So this post is going to get grips with the term ‘evidence-based practice’ and some of the concepts and ideas which are bundled up and implied in its use.  And to help me do this, I’m going to use the work  Kvernbekk (2016) who explores in some depth the role of evidence in evidence-based practice in her book - Evidence-Based Practice in Education: Functions of Evidence and Causal Presuppositions

Evidence-Based Practice – A summary of Kvernbekk

What does this mean for you as an school research lead?

It would seem to me that Kvernbekk’s analysis of the nature of evidence-based practice may have a number of implications for you in your role as a school research lead.

First, if you are ever asked what’s the point of evidence-based practice in schools – the answer is quite straight forward – it’s about making things better by using evidence of what’s worked.

Second, given the causal nature of evidence-based practice, it makes a lot of sense spending time understanding and exploring the potential of  logic models and the relationship between input, outputs and outcomes.

Third, and that is an issue which I’ll discuss in future posts, evidence-based practice is about fidelity to the principles of an intervention, rather than faithfully copying what seems to have worked in another setting.  In other words, if you try and faithfully replicate what someone else has done in making an intervention work, you are likely to fail in implementing the intervention.  The support factors in your school will be different – so how you implement the intervention will also need to be different.

Fourth, it’s really important to understand the role of local knowledge in trying to work out whether the support factors that are needed for an intervention to work, are actually available in your setting.  Research evidence is just one source of the knowledge required to do this – you need to understand your setting.

Fifth, and this is a point which I think Kvernbekk misses – a fundamental aspect of  evidence-based practice involves the systematic determination of the merit, worth (or value) of the outcome of intervention.  Evaluation involves than determining whether something worked, it involves also asking – was it worth it and this requires an awareness of what is valued

If you are at researchED London this Saturday, don’t hesitate to come up to me and say hello 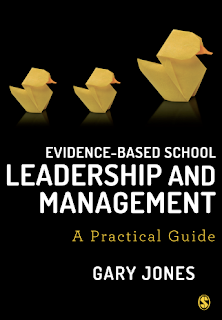 My new book is due in September 2018 Evidence-Based School Leadership and Management: A practical guide