The school research lead, 'factfulness' and 10 reasons why we may be getting things wrong

Over the last few weeks I have been fortunate enough to see both Geoff Barton @RealGeoffBarton and Jill Berry @jillberry speak at conferences.  A theme common to both presentations was the need for school leaders, despite concerns about funding, teacher retention and recruitment to remain optimistic.  And although there are huge pressures of accountability within English schools, school leaders should remember to focus on the joy of teaching young people and the positive change that they can bring to young peoples’ lives. 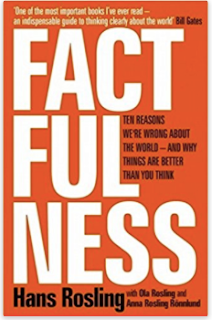 Now it just so happens that I’m reading the late Hans Rosling’s recently published book: Factfulness: Ten reasons we’re wrong about the world – and why things are better than you think. Rosling argues that when asked simple questions about global trends in the world, people systematically get the answers wrong.  However, the world despite all the challenges we are facing, would appear to be in a much better state than we think.  Unfortunately, we have a tendency to worry about everything all of the time, rather than adopting a world view based on facts.  As a result, we lose our ability to focus on those things that matter most.  Instead, we should adopt a stance of factfulness which involves the stress reducing habit of only carrying opinions for which you have strong supporting facts.

So what does this mean for those involved in the leadership of schools?

Rosling et al argue the most important thing that we should be teaching our children is humility and curiosity, and which for me are equally important for school leaders.

For Rosling et al being humble is all about recognising how difficult it is for your instincts to get out of the way of the ‘facts’. It requires you to be realistic about what you know and don’t know.  It’s about asking yourself the questions – what evidence or new facts would it take to change my mind.  Rosling et al argues this is a far more relaxing stance to take – as you no longer have to be right about everything all of the time.  It’s ok to say, I don’t know, so let’s find out together.

Rosling et al argue being curious means being open to new information, facts, ideas and perspectives.  It demands that you allow new information to challenge your existing ideas, preconceptions and perspectives.  It  requires you to say – you know what, I got that wrong – let’s see what we can learn from this.  But it also requires you to recognise that what you have learnt in the past – be it at university, in teacher-training  or through experience – may well be outdated.  What’s right at the start of your career, and may, 10 or 20 years later be out of date or just plain wrong.

Please don't think I'm saying all is rosy in English schools and the important trends are all heading in an upward direction.  Rather I'm just asking that you understand how the grounds on claims are being made, the nature of the claim, the warrant for the claims, whether than warrant has strong backing, whether qualifications to the claim, and whether there any rebuttals.

Rosling, H., Rosling, O. and Rosling Ronnlund, A. (2018). Factfulness: Ten Reasons We're Wrong About the World - and Why Things Are Better Than You Think. London. Sceptre.