Leading the research and evidence based school : Are you ready?

When introducing evidence-based practice into your school a major challenge you will face is having to diagnose your school’s readiness to both engage with and implement research and other evidence. One way of helping you addressing this challenge is to use the Promoting  Action on Research Implementation in Health Services (PARiHS) framework (Kitson, Harvey, & McCormack, 1998) and which provides a useful conceptual and pragmatic heuristic to to help you think about the implementation of research within your school. The PARiHS framework describes the successful implementation of research into practice as being a function of the interaction of three core elements—the quality and type of the evidence, the context, setting or environment into which the research used, and the approaches and techniques of facilitation.

Context – is the environment in which the proposed change – either an evidence-informed intervention or the adoption of evidence-based school leadership – is being implemented. As such, it can be divided into three sub-elements; the prevailing culture; school leadership; and the school’s approach to accountability and development.

Facilitation – this is where one or more persons – for example, senior leaders, school research leads and champions - makes things easier for others and this includes; the characteristics of facilitators; their role; style and skills. In this context, the facilitator’s role is help people understand the change required and what’s needed to be done to bring it about

‘…that for the implementation of research into practice to be successful there needs to be a clear understanding of the nature of the evidence being used, the quality of context in terms of its ability to cope with change and type of facilitation needed to ensure a successful change process’ (p152)

For each of these three elements a range of conditions may exist which indicate the likelihood of the successful implementation of research and evidence-based practices. These conditions are illustrated in Figure 1

As such, those schools which would appear to have the greatest chances of successfully evidence-based practice and associated innovations, would appear to be predominantly on the right-hand high side of the continuum. Whereas those schools who have significant work to do to increase their chances of successfully implementing evidence-based practice, would have features primarily located on the left-hand side of the continuum.

Now having undertaken an initial assessment of your school’s readiness to use research and evidence, try to plot where you and your school are on the following evaluative grid. In doing so, you are going to focus on your evaluation of the evidence and context elements of the PARiHS model. 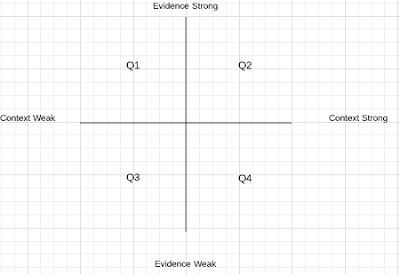 So what does this mean for the facilitation of evidence-based school leadership?  Drawing on the work of (Greenhalgh, 2017) if a primary concern is that colleagues are not aware of the research evidence available to them as teachers and school leaders, a priority for you as the school research lead/champion maybe to help individuals gain a greater awareness of the available evidence and how to evaluate it.    Alternatively, if there is a recognition that the school context is weak – there may be greater focus on putting in enabling conditions – such as focussing on pupil and staff learning, ensuring individuals have clear roles and responsibilities and there is an appropriate organisational framework - such as journal clubs or time for evidence-based CPD

However, whenever we look at a conceptual model and heuristic we need to see whether there is robust evidence demonstrating the efficacy of the approach. For as (Greenhalgh, 2017) notes in the context of healthcare there are no studies of how PARiHS has been used as the original authors have intended, indeed all studies into PARiHS have tended to use the framework to look back at what had been done. That said, as Greenhalgh notes – the PARiHs has what she calls ‘face-validity – that is it seems intuitively sensible that evidence, context and facilitation are all key to implementation. Furthermore, at a broad-brush level, the PARiHS framework is sufficiently flexible to allow its application to many different situations and examples’ (Greenhalgh, 2017).

You may wish to use the PARiHS framework as an initial diagnostic which captures your school’s readiness to engage with the implementation of research and evidence-based practice. If it works for you, fantastic. If not, there may be other models which work in your context such as the NFER self-assessment tool