Leading evidence-informed teaching : the rhetoric and the reality

A recent report sponsored by the Department for Education suggests that there is a significant difference between the rhetoric and reality of evidence-informed teaching within schools, with a number of schools appearing to adopt the rhetoric of evidence-informed teaching, whilst at the same time not embedding research and evidence into their day to day practice (Coldwell et al., 2017).   Of the twenty-three schools involved in the report only six schools could be described as having a whole-school approach to research and evidence, with another seven schools where the head and senior leadership were proactive in their approach to a culture supporting the use of research and evidence, and finally, ten schools having an unengaged research evidence culture.  This finding was particularly surprising given the attention to creating a balanced sample of schools in how they are engaged with research evidence.

The difference between unengaged and highly engaged research evidence cultures is illustrated in the following table from Coldwell, et al 2017 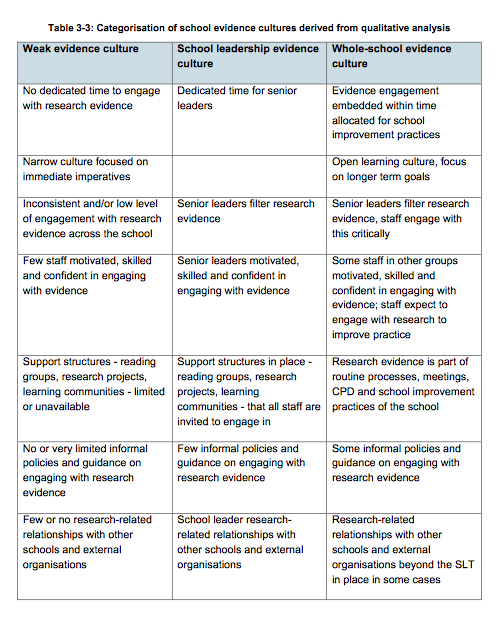 So before I begin a series of posts where I can examine what can be done to close rhetoric reality gap – perhaps it would be worth undertaking a brief self-audit of which column best fits your school’s use of research evidence.   In doing so what I would like you to do if you locate yourself within the school leadership evidence culture and whole school evidence –culture is try and think of three pieces of supporting evidence – which you can use to support your judgement

Next week we will look at the what school leaders can actively do to make sure a rhetoric reality gap does not emerge.