The school research lead and analysing your school's readiness for innovation.

Many school-based interventions fail because they are introduced at too large a scale.  Interventions or innovations which might well have worked if they been developed in a small-pilot, get rolled out into school with insufficient thought given to the know-how, capacity and staff commitment available to support the intervention.   In this post I draw upon the work of Bryk et al (2015) to help school research leads advise senior leaders within a school about the appropriate scale of implementation when introducing a new intervention within a school.

Sizing up the context

Bryk et al (2015) argue that one of the many reasons why many educational interventions/innovations fails is that insufficient thought is given to the organisational context into which the intervention is to be introduced.  So to help school leaders and others improve their abilities to understand their context better they have developed an organisation framework based on three core critiera.

Now depending upon how these three 'variables' playout, this will suggest the level of implementation which is right for that school's context.  So it may be there is little know-how, capacity/capability and commitment towards the intervention, so this may mean either the intervention is abandoned or a small number of volunteers are sought.  On the other hand, there may well be extensive know-how on how to make something work, sufficient resources to support the implementation, and wide-scale teacher commitment to the intervention, which might justify a whole-school roll-out.  And of course, there may be levels of intervention which lie in between these two extremes - such as departmental, year group or key stage.

Bryk et al summarise the above in the following table. 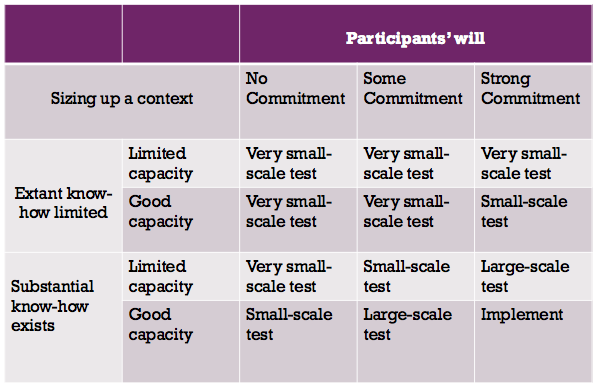 Bryk et al identify a number of both principles and valued goals which are supported by this approach.

As Bryk et al argue not every school based innovation has to start out as a very-small or  small-scale intervention.  If the correct conditions are in place re know-how, resources (human, physical and financial) and commitment then whole school implementation may well be appropriate.  On the other hand, more often than not, an analysis of the context of the school will suggest either a very-small or small-scale pilot.