One way of thinking about being a conscientious evidence-based practitioner is to examine the difference between 'doing things right and doing  the right thing.'  'Doing the right thing' can be viewed as being about what are you doing and why we are doing it.  On the other hand. 'doing things right' should be viewed as being about how things are done, and as such is about the process of being an evidence-based practitioner.

A useful starting point in helping us think about what is meant by 'doing things right' is the notion of disciplined inquiry (Cronbach and Suppes, 1969).  Evidence-based practice - as defined by Barends et al is clearly a disciplined process as there are six-steps or actions to undertake before make a decision. 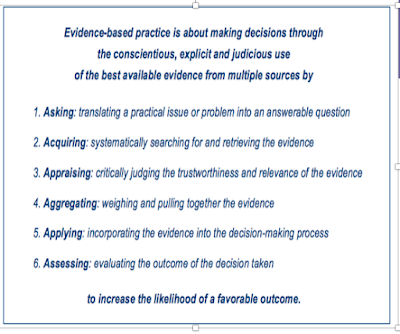 However, merely going through these six steps is itself not enough to sure of 'doing things right'.   Conscientious evidence-based practitioners will also need to ensure that they

Most importantly, a disciplined/evidence-based inquiry needs to be communicated in such a way that it is both understandable and useful for its intended audience.  The 'explicit' evidence-based practitioner communicates in such as to the minimise  the unnecessary use of terminology and seeks to explain things in way is that both simple but not simplistic.

If being conscientious involves 'doing things right' then being judicious means that the evidence-based practitioner should be committed to 'doing the right thing' and displaying what could be described as phronesis i.e sound wisdom judgement. (Flyvberg, 2001)

FLYVBJERG, B. 2001. Making social science matter: Why social inquiry fails and how it can succeed again, Cambridge university press.