Updated - When the evidence is not all that it seems and the case of the 0.84 effect size for leading teaching learning and development

As we approach the end of term, we enter the season of INSET days and a tsunami of PowerPoint presentations by consultants and other experts.  In these presentations we often see the same research referenced and used to justify a particular position or course of action, though without reference to the research's limitations  Indeed, one of the most frequently recycled set of findings is Robinson et al's (2009) research on the impact of different dimensions of leadership on student outcomes, and as illustrated in the following figure (Robinson et al 2009, p39) 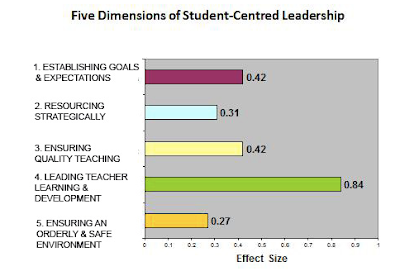 Robinson (2011) states this figure illustrates that : The most powerful way that school leaders can make a difference to the learning of their students is by promoting and participating in the professional learning and development of their teachers.  The average impact (0.84) of these leadership practices on student outcomes was twice that of any other leadership dimension (p104)

Unfortunately, there are a number of limitations to these findings and which are not widely reported.  So here goes:

Robinson (2011) states that when asked - school leaders talk about the symbolic importance of leaders involvement in professional learning. Yet Robinson argues that there are other reasons; first, leaders who collaborate and work with their staff are better placed to engage in professional discussions with teachers; second, headteachers' endorsements of external support/consultants are likely to be more credible as teachers know that their leaders are experiencing what they are endorsing.  However, Robinson surmises that perhaps the most important reason for effect is that the involvement of leaders in teacher professional learning make them more aware of the problems generated by the learning and what is necessary for success, which allows the headteacher to ensure the resources are in place for success.

So what are the implications of this analysis?

At first blush, there would appear to be several implications about what actions school leaders should take to improve student outcomes
However, despite these reservations Robinson et al's research can still provide some guidance for school leaders.
Note - since I originally wrote this post I have been in contact with Professor Robinson, who has provided me with some clarification.  As Professor Robinson states:

These findings are NOT about what heads should be doing. They are about the impact  of different types of leadership practice on student outcomes and I state that, while  half of the studies used teacher ratings of principals, the other half were rating  school-wide leadership. There were not enough studies to do separate  meta-analyses. So they should be interpreted as indicative of the impact of type of leadership practice not of the impact of principalship. (email correspondence, 17 August, 2016)

If you are at a session where a consultant or external expert uses the above figure in one of their PowerPoint presentations, please remember to ask them the following:
References