Do you need to use a STICC to communicate

If you are a teacher, school-research lead or headteacher seeking to improve your decision-making, then this post is for you.  In this post – the first of two on this topic -  I will refer to the work of Hargreaves and Fullan (2012) on decisional capital.  I will then go onto examine different types of problems – be they crises, tame or wicked – and begin to explore the implications for decision-making.   I will then briefly examine the STICC communication and decision-making protocol and apply it to a school example.  A subsequent post will look at work in the health-professions and the competences required for shareddecision-making with patients.  Subsequently I will consider the implication of this model shared decision0making for both evidence-based practice and decision-making within schools.

What is decisional capital?

To develop decisional capital, Hargreaves and Fullan argue that its important for teachers and headteachers to practice their decision-making skills. Hargreaves and Fullan cites the 10,000 hour rule for becoming expert or proficient, and which has gained its prominence through the work of Malcolm Gladwell and his 2008 book Outliers.   Gladwell draws attention to  the work of Anders Ericsson and his colleagues who argue that even the most gifted performers required 10,000 hours of deliberate practice.  Indeed, Hargreaves and Fullan argue that it may take a teacher or headteacher 8 to 10 years of experience before they become a ‘maestro’.  Nevertheless, it is important to note that recent research by Hambrick et al (2014) reported  that only a third of differences in performance, in elite music and chess, can be explained by accumulated difference in deliberate practice.

Hargreaves and Fullan go onto argue that : Decisional capital is also sharpened when it is mediated through the interaction with colleagues (social capital).  The decisions get better and better.  High yield strategies become more precise and more embedded when they are developed and deployed in terms that are constantly refining and interpreting them.  At the same time, poor judgments and ineffective practices get discarded along the way.  And when clear evidence is lacking or conflicting, accumulated experience carries much more weight than idiosyncratic experience or little experience at all. (p96)

However, whilst Hargreaves and Fullan identify the importance of decisional capital, they choose not to explore the different types problems which decision-makers face,  and which may require different approaches to the accumulation of decisional capital.  This next section will begin to explore a classification of different types of problems, whilst at the same offering a protocol for engaging with colleagues in the communication and decision-making process.

There is no doubt that different types of teaching, learning and managerial problems require different forms of decision-making.  Grint (2007) describes how problems can be described as critical, tame and wicked, with each type of problem lending itself to different type of decision-making process.  Critical problems and emergencies may require leaders to provide immediate answers.  Tame problems – which may have been seen before – may require more managerial, process led responses.  Whereas wicked problems – which may not have been seen before, have no stopping point or definition of success, and different stakeholders may various definitions of success – may require more collaborative and collegial approaches.  The relationship between about the increasing uncertainty about the solution to a problem and the increasing requirement for collaboration is illustrated in the following figure 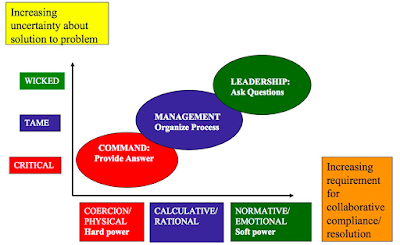 Increasing decisional capital through a communication protocol – the STICC model

One of the challenges of decision-making and is ensuring people know what they are doing and why they are doing, and this is often true  in ‘crises situations’ where the decision-maker may lack all the information at hand.  Weick and Sutcliffe (2007) cite the work of Klein (1999) who developed in conjunction with emergency services – such as forest-fire fighters – a five step briefing protocol called STICC.  Weick and Sutcliffe (2007) describe the protocol as follows:
The value of this model is not limited to 'crises' and can be used for briefing purposes before decisions are made, so now let's examine a worked example of the STICC protocol in use.

XYZ School and the STICC protocol

XYZ school is a Teaching School, which has 15 whole-school initiatives detailed within the school development plan.  The school had its last OfSTED visit in 2009, where it was graded as Outstanding, and the senior team – and in particular the Headteacher – is determined that the school leaves no stone unturned as it continually seeks to maintain its’ reputation – local, regionally and nationally.  As a result, the school is constantly taking on board new initiatives, which are loosely connected and often not supported by robust evaluation evidence

However, the senior leadership team are aware this number of initiatives is placing high levels of stress onto the teaching staff, and this is now being reflected in abnormally levels of absence, and with the first signs of increasing staff turnover, particularly among younger and newly qualified staff.

Situation : Here’s what I think we face

Headteacher, we are beginning to see both high levels of staff absence and increasing and staff turnover, which would appear to be linked to the number of initiatives and innovations which the school is pursuing.

Task : Here’s what I think we should

We should work with the Governing Body and the Heads of Department to identify no more that five initiatives, which are carried forward into the next academic year.  In addition, no more initiatives should incorporated into the school development plan, unless there is substantive evaluative evidence supporting its effectiveness and there is a a clear school need to be met.

Intent : Here’s why I think this is what we should do

The reason I am making this recommendation, is that I am concerned with the impact of the large number of initiatives on staff absence, morale and culture, which  may lead to use losing some of our very best staff, particularly in shortage subject areas.  In addition, by taking on too many initiatives we are risk of spreading ourselves too thinly and not doing things as well as we should.

Concern : Here’s what we should keep our eye on because if that changes, were in a whole new situation

Of course, we will need to look out for new initiatives that we well need to take in response to any changes in legislation or any new problems or issues that have emerged in the school.  We will also need to work with colleagues, so we can demonstrate the rationale for the reduction in the number of initiatives, and will need to support colleagues who ‘own’ initiatives and which are no longer supported

Calibrate : Now talk to me.  Tell me if you don’t understand, cannot do it, or see something I do not

Tell me if my analysis is incorrect, are there some things I have missed out or have got wrong.  Are there areas of agreement.  Am I recommending something we can’t or should not do?

The value of this protocol is several fold.  First, in terms it provides an easily remembered structure for explaining a situation , whilst at the same time providing an opportunity for feedback from colleagues.  Second, it provides a mechanism for checking  whether what is being suggested is feasible.  Third, it provides team members with permission to raise issues which may have been omitted. Finally, it provides a useful structure to develop leaders so they can gain deliberate practice in briefing colleagues.

This post has argued that robust communication and decision-making protocols – which have their origins outside of education – can be  useful in helping school leaders increase decisional capital.  In my next post, I will explore how school leaders can benefit from decision protocols  which have developed in the health professions – re decision shared decision-making with patients, which may be of value in making shared decisions with colleagues.