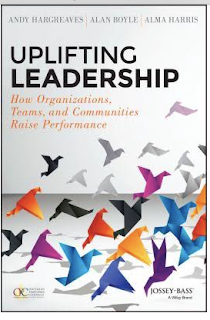 If you are a senior, middle or aspiring leader within a school or college, then this post is for you.  In particular, if you work in a school where you are having to do more with less; where the pupil achievement is not all that it could be; or where teacher morale is poor,  then this post may provide some guidance on how transform what you do and at the same time stay resilient in the face of difficult times.  In doing so, I will be using Andy Hargreaves, Alan Boyle and Alma Harris's 2014 book Uplifting Leadership : How organisations, teams, and communities raise performance, which draws upon research in eighteen organisations and systems - in business, sports and and public education - and identifies what these organisations did to dramatically improve their performance, often against overwhelming odds.  For Hargreaves at al in the end it all came down to one word : Uplift.


What do we mean by Uplift?

Hargreaves et al define uplift within organisations as .... the force that raises our performance, our spirts, and our communities to attain higher purposes and reach unexpected levels of achievement (p1)

As such uplift is about emotional and spiritual engagements, social and moral justice and higher levels of performance, both in work and life.  Let's now briefly look at each in turn.

Emotional and Spiritual Uplift  .... the beating heart of effective leaders.  It raises people's hopes, stirs up their passions, and stimulates their intellect and imagination.  It inspires them to to try harder, transform what they do, reach for a higher purposes, and be resilient when opposing forces threaten to defeat them. Uplifting leadership makes spirits soar and pulses quicken in a collective quest to achieve a greater good for everyone because we feel drawn to a higher place as well as to the people around us as we strive to reach it (p3)

Social and Community Uplift and .... creating a collective force which is designed to raise everyone's opportunities for achievement and success - with particular reference to those in our communities who are the least well-advantaged.

Uplifting Performance ....raises performance by creating, spiritual, emotional, and moral uplift throughout an organisation and wider community that it influences (p4)

What does Uplifting Leadership involve?

Uplifting leadership involves six inter-related factors which come together to bring about transformations within organisations and these include:
What's the evidence base to support Uplifting Leadership?

The evidence-based which informed Uplifting Leadership was drawn from a number of interconnected projects.  First, a project conducted between 2007 an 2010 that looked into public an private sector organisations which performed beyond expectations.  Over 200 in-depth interviews were conducted across 18 projects sites ( five in business, four in sports, and nine in English education).  Within-case and cross-case analysis was to used to identify underlying themes.  Within the original 18 cases - fifteen factors were identified which seemed to explain performance beyond expectation. In order to reach a broader audience an additional sports team was included in the analysis alongside two educational cases - based in Canada and Singapore. Other work being undertaken by the authors was also drawn upon.  This work  included research on successful turnarounds, reform of special education in and a case-study of a London borough.  As a result of combining these research efforts - the analytical framework was reduced from fifteen to six factors.  Additional cases from secondary sources were also drawn upon.

What does this mean for me, a school or college leader?

Hargreaves et al identify a whole range of practical actions that school leaders and their colleagues can take to be uplifting leaders: be become great storytellers; surprise yourself; benchmark relentlessly; avoid cliques and elites; measure what you values; invest for the long-term.  Nevertheless, when it is as all said and done - and as Hargreaves et al argue - uplifting leadership begins with the self, and go onto to cite Manuel Kets de Vries who argues 'if we want things to be different, we must start by being different ourselves'  (Hargreaves et al p 161).   In other words, if we want to lead others, we'd better start by leading ourselves.