On Saturday I had the privilege of attending ResearchED's Research Leads one-day conference.  It was an incredible day full of intellectual challenge mixed with the opportunity to meet some wonderful colleagues.  However, what was deeply ironic given that the event was being held in the Franklin Wilkins building at Kings' College London, and which is named after two of the discoverers of the 'double-helix', was that we were not standing on the 'shoulders of giants'.  Many of the issues and topics which we wrestled with have already, to a very large extent, been engaged with by practitioners in the fields of evidence-based medicine and more generically evidence-based practice.
So how do we go about standing on the shoulders of giants, particularly with reference to the role of a research-lead in a school and how research-leads could go about performing their task.  Both Alex Quigley and Carl Hendrick did an admirable job in trying to map out the territory for the research-lead and some of the roles and tasks that need to be performed.  For me a fantastic starting point for building upon this discussion is the work of Barends, Rousseau, & Briner's (2014) and their pamphlet on the basic principles of evidence-based management.  Barends* et al state: 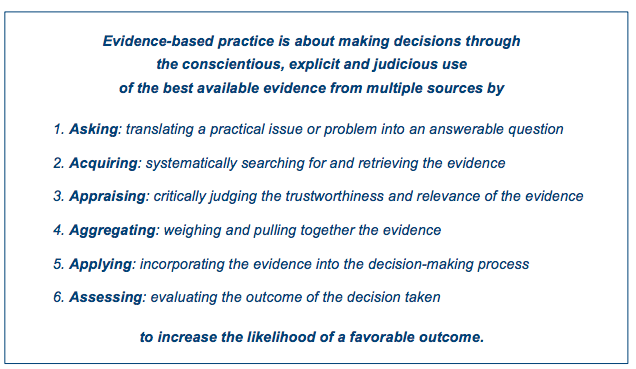 From the point of view of a school-research lead this definition has a number of implications.
So what does this mean for the research lead's role in a school? Well a highly relevant place to start is to look at those leadership capabilities which appear to have the biggest impact on student and in this case teacher learning.    Given that we a seeking to develop processes which are 'research' led there is no better place to start than the work of Viviane Robinson on Student-Centred Leadership, which is based on both a best-evidence synthesis of the impact of leadership on student achievement, and which identifies three key leadership capabilities: applying relevant knowledge; solving complex problems and building relational trust.  Below I have begun to  tentatively examine what this might mean for research leads, so here goes:
In order to help with the development of the role of the research-leads the next few posts in this series will draw upon material from both the evidence-based medicine and the broader field of evidence-based practice to look at the following:
*This definition is partly adapted from the Sicily statement of evidence-based practice: Dawes, M., Summerskill, W., Glasziou, P., Cartabellotta, A., Martin, J., Hopayian, K., Porzsolt, F., Burls, A., Osborne, J. (2005). Sicily statement on evidence-based practice. BMC
Medical Education, Vol. 5 (1).
References
Barends, E., Rousseau, D. M., & Briner, R. B. 2014. Evidence-Based Management : The Basic Principles. Centre for Evidence Based Management (Ed.). Amsterdam.
Robinson, V. (2011) Student-Centered Leadership, Jossey-Bass, San Francisco
Posted by Gary at 20:40