If you are school-research lead then this post is for you.  In particular, if you are interested in using evidence - be it research, school data, stakeholder views and practitioner expertise - within your school, then this post will help you understand the different stages of the evidence-informed inquiry process.  To help with this,  I will be drawing upon the work of Chris Brown, (UCL Institute of Education), Kim Schildkamp and Mireille D. Hubers (both of the University of Twente) and their presentation COMBINING THE BEST OF TWO WORLDS: INTEGRATING DATA-USE WITH RESEARCH INFORMED TEACHING FOR SCHOOL IMPROVEMENT which they made at the recent International Congress for School Effectiveness and Improvement conference held earlier this year in Glasgow.   The rest of this post will: first, summarise the thesis underpinning the development of Brown et al's model; second look in more detail at the proposed cycle of evidence-based inquiry; third, identify a number of potential limitations/design flaws within the proposed cycle; fourth, put forward an alternative model which is based upon evidence-based practice.

The main 'thesis' underpinning Brown et al's presentation was a call to integrate data based decision-making (DBDM) and research informed teaching practice (RITP) into a comprehensive professional learning based approach that is designed to enhance teaching quality, and a result increased student achievement.  As such, the model is attempting to use the strengths of each approach to offset the weaknesses of the other.  Brown et al summarise the offsetting benefits of each approach as follows:

Brown et al then go onto integrate DBDM and RITP into the following eight stage cycle. 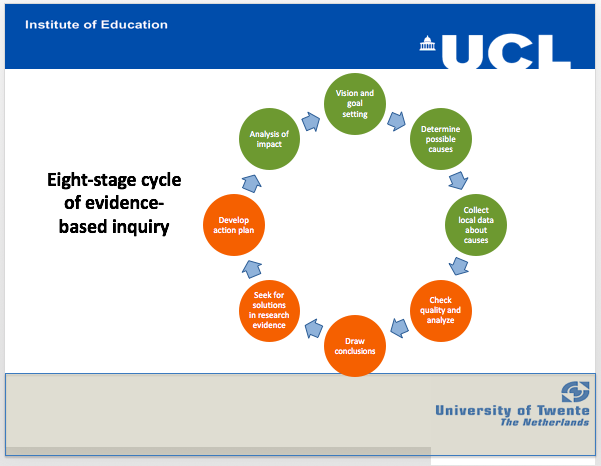 However, for me, the model two limitations to be taken into account: first,  the determination of  causes coming before the collection of data; second, the potential of for increasing the risk of confirmation bias.    So lets now examine each of these limitations in more detail.

Causes before data or vice versa

The eight stage model presented places the stage of determining possible causes of the problem before collecting data about causes,  which to me seems to be out of sequence and in reverse to order to what they should be . Indeed, there are other models of data led inquiry where data collection comes before diagnosis - and this illustrated in the four stage model of inquiry popularised by Roger Fisher and William Ury  in the their classic book Getting to Yes 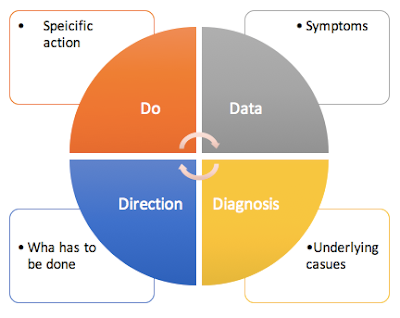 In this model the data stage focuses on identifying what's wrong, what are the current symptoms, and then moves to the identifying of possible causes in the diagnosis phase, with the next two phases being direction setting and action planning.  For me, and I know when you use these cycles you move back and forth between the stages - it seems far more sensible to place the data-collection before the diagnosis phase.   In addition, and I thank Rob Briner for this observation, the proposed process seems to separate use of the of research evidence from the diagnosis phase.  Yet, why would you not use research evidence to help you identify possible causes of the symptoms being experienced.

The potential for cognitive bias

Barends, Rousseau and Briner (2014) provide an extremely useful definition of evidence-based practice, which identifies a six-stage process in making decisions which are based upon evidence.  In this model the search for and acquiring of evidence happens at stage two, with research evidence, organisational data and stakeholder views being accessed.  This leads to the subsequent appraisal and aggregation of the evidence resulting in the incorporation of the evidence into the decision-making and action planning process. 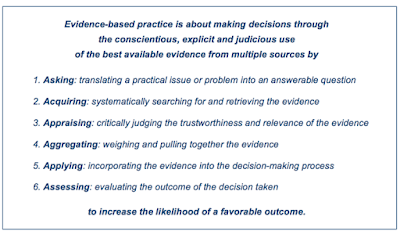 However, this process does not fully incorporate all the elements of included in the proposed eight-stage cycle of evidence-informed inquiry i.e vision and goal setting.  This 'omission' can be rectified if so required, by the inclusion of another 'A' representing : Ambition, aims and goal setting and which relates to the vision, mission and values of the school, and which gives us a 7 stage cycle of evidence-based inquiry. 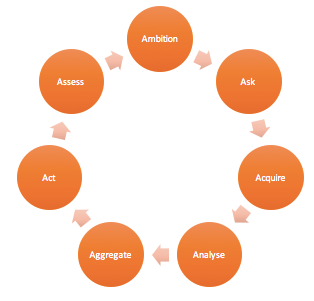 Brown et al make a powerful case for combining DBDM and RITP and have developed a potentially useful initial synthesis of the two processes.  However, the proposed model has some inherent limitations, be it diagnosis taking place before data collection and increased possibilities of confirmation bias taking place.  Finally, an alternative model - the 7 A's of evidence-informed inquiry - is put forward as way to think about the process of linking DBDM and RITP.