New - Why certain practices reach the classroom and others don't 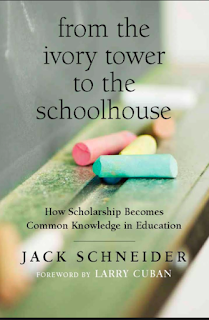 If you are interested in how educational research and ideas reach the classroom, then this post is for you.  Based on Jack Schneider's 2014 book From the  ivory tower to the school house this post see to explain why some educational research and ideas become common practice in schools, and why others do not.  Schneider identifies four attributes - perceived significance, philosophical compatibility, occupational realism, and transportability-  that educational research must have ... if teachers are to notice, accept, use and share (Schneider, p7).  Finally, I will consider the implications of Schneider's analysis for the implementation of evidence-informed practice.

However, before I look into these four attributes in more detail, I will quickly recount Schneider's summary of the arguments as to why much educational scholarship has little impact on the practices of teachers and pupil learning.  First, Schneider argues  there is little or no 'practice ready scholarship' with academic writing being for each other academics and researchers rather than teachers.  Second, teachers are antagonistic to new ideas: teachers have worked to make the profession comfortable for themselves and are determined to protect the status quo.   However, Schneider argues that the real reason why the is a separation between academic scholarship and teaching practice is the separation of capacities and influence required to shift research into the classroom.  Teachers may be able to influence what goes on in the classroom, they normally lack the capacity and capability to engages with academic research.  Whereas policymakers may be well positioned to connect with the 'educational HE academy' they are not best positioned to directly influence the classroom.


Nevertheless, Schneider argues that educational research, ideas and scholarship can move from the ivory tower/academy to the classroom if the research/idea possesses a set of specific attributes.  So what are these attributes:
Schneider argues that the possession of these four attributes is a necessary but not sufficient condition for research or an idea to move from the ivory tower to the classroom and illustrates this with reference to a a number of other innovations, for -  the taxonomy for the affective domain, Sternberg's triarchic theory, Wittrock's generative learning model; and finally, the behaviour analysis model - which have not made the jump from the academy to the classroom.   Furthermore, just because an educational idea/research has these four attributes does not in itself guarantee that it has merit or worth, examples of this being the popularity of Brain Gym and Learning Styles.

Applying the four attributes to the development of evidence-informed practice within schools.

The above analysis would suggest that the success of the evidence-informed practice movement is by no means certain, and if anything the movement is more likely to fail than succeed.

If you believe in evidence-informed practice in schools - what is to be done?