The School Research Lead and Journal Clubs - Do we need a logic model?

There is currently much interest in the use of journal clubs within schools.  For example, both the Blackpool (St Mary’s Catholic Academy) and Durrington Research Schools are currently promoting the use of journal clubs in their schools.   In addition, we have the Chartered College of Teaching operating a ‘virtual journal club’ through its monthly book club.   However, it should be noted that this is nothing new as Beth Giddins has been promoting the use of journal clubs since 2015 (https://www.edujournalclub.com/journal-clubs/)    Nevertheless, there is very little research available on the effective use of journal clubs within schools, with (Sims, Moss, & Marshall, 2017) being a notable exception.   With that in mind, this post, will be the first in a series of blogposts which looks at the of journal clubs.  In doing so, I will be drawing upon a number of systematic reviews in medicine and health settings which look at how effective are journal clubs in supporting both continuous professional development and evidence-based decision-making (Harris et al., 2011) and (Deenadayalan, Grimmer-Somers, Prior, & Kumar, 2008).  However, the first post in the series will briefly examine a possible logic model/framework for use with teacher journal clubs.

Put simply, a logic model graphically illustrates the components of an intervention in terms of inputs, output and outcomes.  Figure 1 illustrates how the various elements of a very simple logic model come together.   The inputs represent the resources that are put into the programme or intervention, money, time and skills.    The outputs, represent what is done, the activities associated with the programme and who the programme reaches.   Finally, the outcomes are the changes and benefits (and possibly, costs) which accrue in the short, medium and long-term, for examples change in teacher knowledge and skills, application in the classroom and improvements in pupil learning.

Adapting the work of (Harris et al, 2011) it's possible to be come up with a detailed logic model for for how a teacher journal club might work. 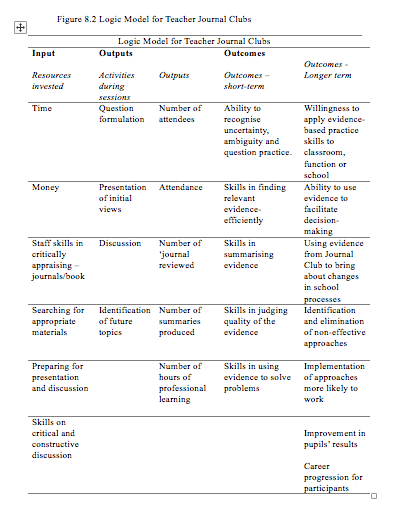 The benefits of using a logic model


However, as noted at Community Toolbox - logic models can have a number of weaknesses.
And finally

Next week I'll look at some of the evidence about what needs to be done to make sure your journal club is a success.